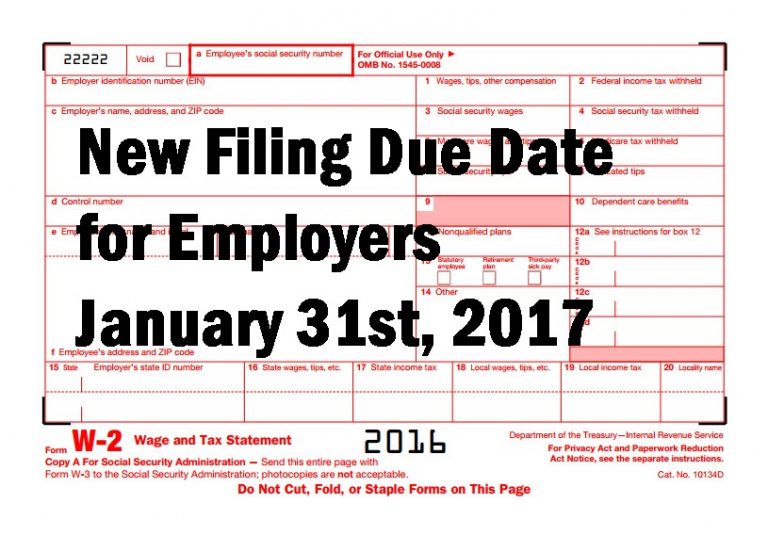 One of the items passed in The Protecting Americans from Tax Hikes (PATH) Act of 2015, which was signed into law by President Obama on December 18th, 2015, was an effort to prevent tax return fraud.  The Act accelerated the filing deadline for businesses for year-end informational returns such as forms W-2 and 1099-MISC* by 60 days to January 31st of the year following the tax year of the form.  This makes the SSA and IRS filing deadline of their respective forms the same as the deadline for their distribution to employees and contractors.  This new deadline of January 31st has no regard for whether the form is filed on paper or electronically.

In previous years, a fraudulent tax return could be filed with a fictitious W-2, say in early February, and the IRS would not have a means of validating it until months later since an employer may not file their copy until the end of March.  According to the IRS Commissioner John Koskinen, “Obviously, the earlier we get them, the more useful they are to us, in determining whether questionable returns are legitimate or not.  If we’ve got suspicious returns, and we had over 4 million of them last year, if we have a matching and good W-2, it allows us to lower the rate of what we call false positives, where we’ve got a legitimate taxpayer whose return for other reasons was now in our suspicious pile.”

What this means to businesses is that they can no longer take their time in year-end processing.  Recording any post year-end adjustments such as taxable auto fringe benefit, third party sick pay, and group term life insurance need to be made as soon as possible as well as reviewing year-end totals for any discrepancies.  There will no longer be that grace period between the time the forms are issued to the employees and then filed so the workload for the payroll department will be much greater towards the end of January.  Knowing this ahead of time and being prepared is key.  Plan your January accordingly.

This Act also allows employers to display a truncated Social Security number on any tax form issued to an employee or contractor.

Of course, the following states do not require any W-2 form filing as they either do not have state income tax, or the information is filed on their quarterly combined filings; Alaska, California, Florida, Hawaii, Nevada, New Hampshire, New York, South Dakota, Tennessee, Texas, Washington, and Wyoming.

*One small exception to the 1099-MISC form, and that is if there is no amount reported in Box 7, then the filing deadline has not been accelerated and the original dates of February 28th , if filing on paper, or March 31st, if filing electronically remain.

As with the reporting of anything having to do with the government, these deadlines may change.  Consult with your payroll service or tax practitioner towards the end of the year regarding your specific state.