E-Verify – Do You Know Who You Hire? 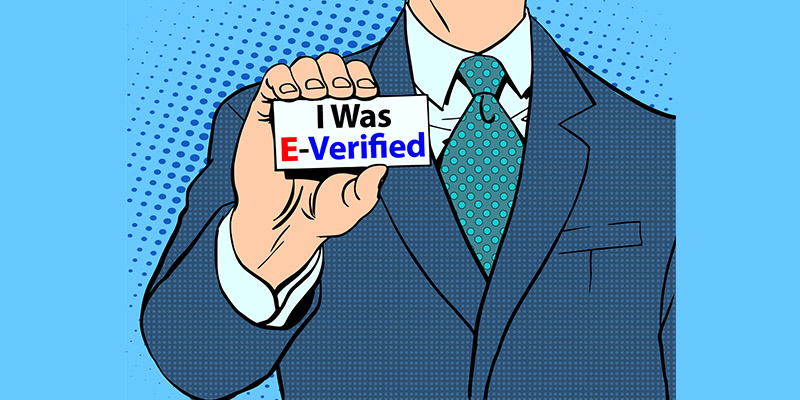 E-Verify started as a pilot program in 1997 to help employers verify the work authorization of new hires.   When you have an employee complete a USCIS Form I-9, you are taking the word of the employee and the face value of the documents they provide.   E-Verify allows you to confirm the provided documentation against multiple government databases.

All employers must first complete an I-9 form for every new hire, within three business days of the date the employee starts work.  Employers must not begin the I-9 process until after the individual is hired.  The newly-hired employee jointly completes the I-9 form by choosing from several documents to prove identity and authorization to work, such as a U.S. passport, or a combination of a driver’s license and social security card.  Any documents produced by the employee must appear genuine.

The employer then enters the information provided on the I-9 form into the E-Verify system, where it is compared against about a half billion records in the Social Security Administration database and 80 million records in the Department of Homeland Security’s immigration database.  Most inquiries are returned within 3 days.  In the event of a non-confirmation notice, the employee must visit a SSA office or call DHS, and the employee has eight federal work-days to start resolving the case.  Only about half of those who receive a non-confirmation notice contest it.

While the accuracy of the database has improved substantially, the error rate was too high for it to become a federally mandated program.  Although, as of Sept. 8, 2009, federal contractors or subcontractors are required to use E-verify to determine employment eligibility of employees performing direct work on the contract and new hires.

Two states, California and Illinois have taken an adverse approach and actually limit the use of E-verify by prohibiting states and localities from requiring employers to use the program.

*As you can see from each state passing their own laws, and for that matter multiple laws, you should check with any states in which you have employees to confirm you are complying with the most up to date regulation.

Enrolling in E-Verify is easy and free and can be accessed at the U.S Citizenship and Immigration services website  https://www.e-verify.gov/employers/enrolling-in-e-verify

For users of our PayMaster HCM system, we have the ability to connect into the E-Verify system to perform verification with just a few clicks from the Employee Information screen.  Contact us for more information.

Published in Employee Management, I-9, PayMaster HCM and Uncategorized