W-2 Box 9 is Back as a Crimefighter 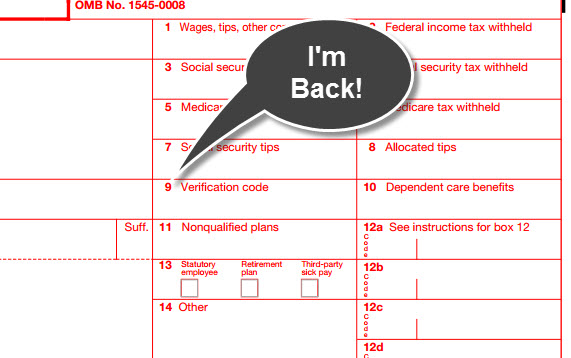 Ever since the IRS did away with the Advanced Earned Income Credit (EIC) in 2010, Box 9 on the W-2 form has sat there unused and neglected as a greyed out box.   The instructions simply read “Do not enter an amount in box 9.”

Now, six years later, the IRS has an idea to help combat tax-related identity theft and refund fraud.  Their objective is to utilize this box to verify that the W-2 data submitted by taxpayers on e-filed returns is legitimate.   This year, the IRS will run a pilot program where a limited number of W-2s will include a 16-digit code on the copies provided to employees.  The code will be displayed in four groups of four alpha-numeric characters, separated by hyphens;   XXXX-XXXX-XXXX-XXXX.

Taxpayers receiving a W-2 without a code in this box should not worry, as they can still e-file their income tax return and have it processed without delay.  If there is a code in box 9, then be sure it is entered, when requested, by your tax return preparer/preparation software.

Published in Uncategorized and W-2