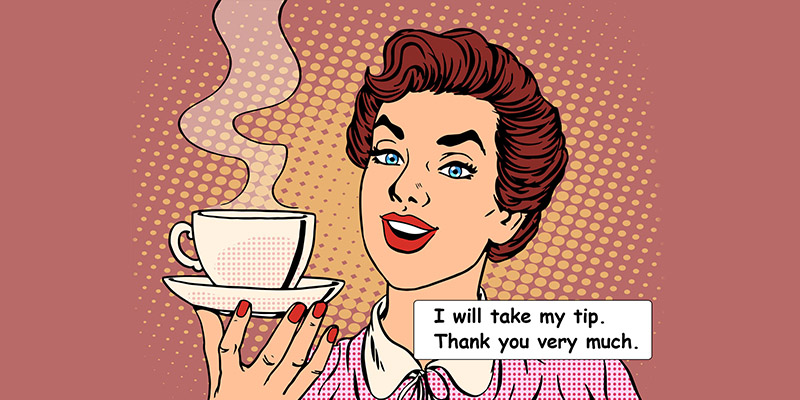 Tipping started in England centuries ago and in the late 1800’s as wealthy Americans traveled abroad to Europe and witnessed this practice, they brought the aristocratic custom back with them to “show off” their elevated education and class.   This was not embraced by all Americans and a movement against tipping began in the late 1890’s as many believed that it was against the country’s ideals.   In 1904, the Anti-Tipping Society of America was formed, then in 1909, Washington became the first state to pass an anti-tipping law.  In fact, by 1915, six state legislators from Wisconsin, Illinois, Iowa, Nebraska, Tennessee, and South Carolina attempted to pass a bill that would make tipping unlawful nationwide, but it failed.  It was seen as the vilest of imported vices because it created an aristocratic class in a country that fought hard to eliminate a class-driven society.  In 1916, William Scott wrote “The Itching Palm” (read the book here), a book against tipping in which he stood up against the policy of paying for a service twice, and decried tips to be “democracy’s mortal foe” and creates “a servile attitude for a fee.”

As we get back to modern times, the tables have turned, so to speak.  Tipping is not expected in the UK as all staff must be paid the national minimum wage (no tip minimum wage there), and it is now expected in the US.  Does this mean that as individual states pass laws to make the minimum wage for all employees the same, that tipping in the US be become extinct?  It is quite likely.

Opponents to the single minimum wage include many restaurant owners, the Restaurant Association of Metro Washington, and the National Restaurant Association (not to be confused with the NRA) stating that it would lead to job losses, increased menu prices, and restaurants closing.  There are even many tipped employees against this measure who have formed the “Save Our Tips” campaign.  They claim that if the tip credit is removed, which guarantees them minimum wages in the first place, that business owners will raise prices or institute a service charge thus eliminating tipping.  If we look at a breakdown as to how the residents of D.C. voted, we find that strong proponents for Initiative 77 came from the predominantly African American neighborhoods, while majority white areas opposed it.  Here is an interactive map showing the voting by precinct along with the poverty rate and percent white.

Seven states – Alaska, California, Minnesota, Montana, Nevada, Oregon, and Washington have all ended the tip minimum wage.  The battle over tips has spread to New York, where Governor Andrew Cuomo announced a series of statewide hearings to discuss eliminating the tip minimum wage.  If this spreads nationwide, will tipping become extinct?