Thinking about a PEO? Think Twice. 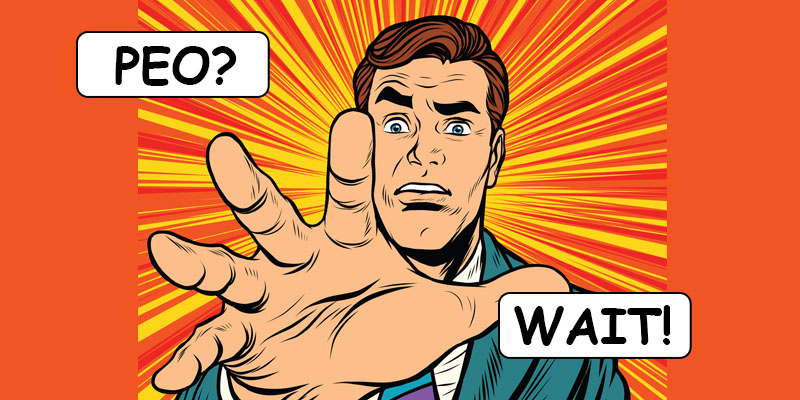 While I am biased, as President of PayMaster, a payroll service provider, I do find the rare case for a business to utilize the services of a Professional Employer Organization (PEO) or Employee Leasing as it is sometimes referred to.  In my opinion, there are only two reasons for a business to utilize a PEO, and that is in regards to Health insurance and Workers’ Compensation insurance as we will discuss.   If the PEO route is the decision then I strongly recommend proceeding with caution and do your math, taking into consideration the big picture of the financial cost.  This not only includes the Administration Fee (the cost the PEO charges for their services), but also Workers’ Compensation, Health Insurance, Unemployment Tax, and Employment Tax costs.   If you are focused on just one or two of those items, you will lose.

Health Insurance – Group health insurance is based on the overall health, age, and gender of your covered employee pool.  If your company has a high population of costly to insure individuals, then with a PEO, your group could find a lower average rate per employee.  Conversely, if the company has a high population of young males, then the effect is quite the opposite.  I found this to be the case with a company that employed several hundred workers at retail tech stores.  With the PEO, their health insurance cost was more than doubled as their average cost rose to that of the PEOs population.

Workers’ Compensation – If your business is in a high risk industry and you are not able to find coverage, then a PEO may be the only resort outside of the state pool.  Although don’t rule out that your workers’ compensation agent may not represent a carrier that covers your line of work.  I have seen many roofers and marine based businesses find a carrier, so look for them, they exist.

If your business has suffered numerous and/or costly worker injury claims, then it is likely that you have an experience modifier (aka MOD) greater than 1.00.  Every employer pays the same rate for the same type of work their employees perform, as rates are set by the state, so to penalize those employers who have claims, National Council on Compensation Insurance (NCCI) determines this factor based on claim history.  A MOD greater than 1.0, means that you are paying a multiple of the state’s dictated rate.  If you have a very high MOD, then it may be advantageous to be with a PEO and fall under their MOD.  Note that if you continue to have large claims, the PEO is not going to be happy as it goes against their record, and you may find yourself booted from the PEO.  If your MOD is 1.0 or less, then you are better off not with a PEO.

If you are not with a PEO, with your own policy, you can take advantage of discounts that you would not otherwise receive.  Discounts such as the safety credit and the drug free workplace, along with rebates or ‘dividends’ that many carriers offer when there is a low or no injury claim policy year.

A for profit employer will pay federal unemployment tax, which is a fixed .6% rate, plus the state unemployment tax.  The state tax is at a rate that will fluctuate based on the ratio of claims paid compared to the gross payroll of the employer.  A new business will start at 2.7% tax on the first $7,000 of wages paid to each employee, per calendar year, using Florida as an example.  After 3 years and a quarter, that rate will drop as low as 1.1% (some prior years as low as 0% based on the economic condition of the state) if there were no claims, or somewhere lower than 2.7% if there were very low amount of claims.   If there was a large amount of claims, then the rate can go as high as double to 5.4%.  While this may seem like a lot, the difference between the highest rate and the lowest rate is $300 per year, per employee.

With all other items being equal, this should not be the reason for a change to a PEO.  Why?  Let’s do the math.  Say your company is at the highest rate of 5.4%, so you will have an unemployment tax expense of $378, and if you are using a payroll service that one employee may cost about $50 in fees over the course of the year. Total of $428.  If your average employee earns $20,000, and a PEO is going to charge an admin rate of 3% and their unemployment rate is 2.7%, then the PEO fee for the year is going to be $789 based on these two items.   Moral of the story; do the math as a lower unemployment rate with the PEO is not what it may seem.

If PEO is the decision, then make sure you familiarize yourself with the games they play when it comes to taking advantage of your business.  In my 25 years in the industry, I have seen many PEOs scam money from their clients.  I have no other word for it, as I believe some of their practices are downright dishonest.  I am not saying that they all are, but there are many that prey on the business owner/decision maker not knowing payroll taxes or are simply deceived.  The following are all scenarios I have personally seen on a regular basis.

Scenario #1 – The unemployment wage limit scam.  When you are not with a PEO, you only pay unemployment tax on wages up to the state’s limit.  As previously mentioned, Florida’s limit is $7,000, so there is no more tax liability for wages in excess of that amount.   It is not uncommon for a PEO to assess their clients for what they call “unemployment tax” on all wages the employee earns with no regard to a limit.  Sometimes I have seen the PEO fool their client and offer a very low unemployment rate to make the client feel like they are getting something.  They will charge a low 1.5% tax rate, but fail to mention that they don’t cut off at $7,000.

Scenario #2 – The shell game. I find this one way too often, and it is where the PEO makes you think you are winning, but you are really not.  They offer the business something that catches their attention, such as cheap health insurance.  They dazzle with rates so low that the business owner fails to see that they are charging so much more somewhere else.  I once lost a payroll client to a PEO who said that the PEO was going to save them over $50,000 per year in their health insurance rates.  What they did not realize, was that the Admin fee of the PEO, as a percentage of wages, exceeded our payroll processing fees by $80,000.  That $50,000 savings just cost them $80,000.

Scenario #3 – The tax scam.   Just because the PEO charges the business payroll tax, or OASDI, or Social Security, or Medicare, or whatever naming they may use, does not mean it is a true indication of accurate tax that an employer would pay.  The PEO can charge you whatever they want and call it tax.  I found a victim of this scam just last week.  Social Security (aka OASDI), and Medicare tax is paid equally by the employee and employer, so this was an easy catch for someone with that basic knowledge.  See how much is the total employee deduction and then see if the PEO is charging the same to the business.  In this recent example, on the PEO’s bill, there was a line item for Gross pay and a charge to the employer for Social Security and Medicare Tax.  The tax amounts were at their respective 6.2% and 1.45% of the Gross pay, so it looked legitimate.   But, here is the scam.  The employees had pretax health insurance deductions, so the taxable wage was less than the Gross wage amount found on the invoice.  The PEO was pocketing, as extra profit, the amount they called Social Security and Medicare “Tax” as billed on the invoice to the amount they would actually remit to the IRS.

If you do not agree that is a scam and deception on the part of the PEO, then I have a bridge to sell you.