Gifts to Employees – A Taxing Topic 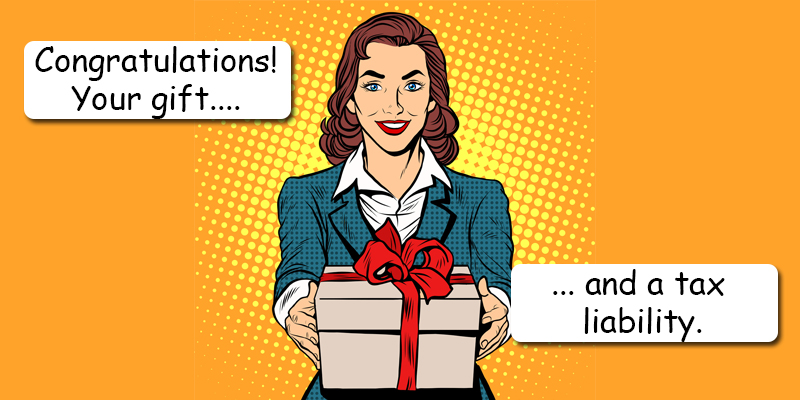 We all know that when we pay an employee in cash/wages, it is a taxable transaction to the employee.   What is less commonly known is what should happen when something of value other than cash/wages is given.  Gifts such as a Thanksgiving turkey, a $25 store gift card for a job well done, a Caribbean cruise vacation for meeting a sales quota, or even a Rolex watch for an employee’s twenty-year anniversary with the company all have different tax consequences.  Sometimes the exact same gift given under two different situations may be taxed differently. This article will cover the handling of many common situations.

First off is the always-treated-as-taxable gift category.  This would be anything that is cash or cash equivalent, such as a store gift card, and it does not matter how or when it is given.  The IRS looks at this simply being the same as wages paid, thus, treated the same. Also treated as taxable are gifts and awards based on performance.  This follows the rule that since they are presented in return for an employee’s performance or services, it is treated the same as wages paid. In my examples described in the first paragraph, the Caribbean cruise vacation would fall under this category.

The opposite of that is the never-treated-as-taxable category.  This includes de minimis benefits, which are small and infrequent gifts with an emphasis on the value and frequency.   A Thanksgiving turkey or holiday ham would be a perfect example of this, and it can also include tickets to a sporting event or an occasional coffee-and-donuts-day at the office.  The IRS has ruled previously in a particular case that items with a value exceeding $100 could not be considered de minimis, even under unusual and infrequent circumstances.  This means that tickets to the Super Bowl, for example, would not be de minimis.

Now for the gray area of exceptions to taxation.  Awards of tangible personal property given to an employee for a particular length of service or safety award are not taxable income if the value of the award does not exceed limits specified by the IRS.  The IRS limits are based on whether the award is given under a qualified or non-qualified plan. What makes the plan qualified, you ask? In either case, they must be awarded as part of a meaningful presentation and under conditions and circumstances that do not create a significant likelihood of payment  disguised as compensation. For the safety award, a manager, administrator, clerical employee or other professional employee, cannot be the recipient, nor can greater than ten percent of the remainder of employees. This means if 3 employees in a company of 20 receive a safety award, it is a non-qualified plan.  For the length-of-service award, an employee cannot be eligible for this during their first five years of service, and the employee must not have received any other length-of-service-award that same year or for the previous four years.

A qualified plan gift that meets that criteria above can be excluded from income for amounts up to $1,600, and the limit for a non-qualified plan is $400.  Those are annual amounts, so an employee can receive four $100 gifts for safety throughout the year. If an employee is the recipient of both a qualified and non-qualified gift in the same year, the employee is limited to $1,600.  The $400 and $1,600 limits are not combined.

To hopefully clear up any confusion, here is an example:  Tom received three employee achievement awards during the year, a non-qualified plan award of a television valued at $250 and two qualified-plan awards consisting of an iPad valued at $1,000 and a set of golf clubs valued at $500.  Each award by itself would be excluded from income, however, the $1,750 total value of the awards is more than $1,600, so $150 ($1,750 − $1,600) must be included in his income.

I use the word ‘valued’ above, but I should really say  ‘Fair Market Value (FMV)’ because it is not always how much the gift actually costs the employer.  FMV is the amount a willing buyer will pay an unrelated willing seller, neither one forced to conduct the transaction and both having reasonable knowledge of the facts.  In many cases, the cost and FMV are the same, however, there are many situations in which FMV and cost differ, such as when the employer incurs a cost less than the value to provide the benefit.

Taxable gifts are inclusive of all taxes, including federal income tax, Social Security (OASDI) and Medicare tax, and federal unemployment tax.  You can add the FMV of the gift to regular wages for a payroll period and figure income tax withholding on the total, or you can withhold federal income tax on the value of fringe benefits at the flat rate of 22% which applies to supplemental wages.   That flat rate increases to 37% when supplemental wage payments to an individual exceed $1 million during the year.

You can treat the FMV as paid on a pay period, quarter, semiannual, annual or other basis, but the benefits must be treated as paid, no less frequently than annually.  You don’t have to choose the same period for all employees, and you can withhold more frequently for some employees than for others. You can also change the period as often as you like, as long as you treat all of the benefits provided in a calendar year as paid no later than December 31 of the calendar year.  You can also treat the value of a single gift as paid on one or more dates in the same calendar year, even if the employee receives the entire benefit at one time. For example, if your employee receives a fringe benefit valued at $1,000 in one pay period during 2019, you can treat it as made in four payments of $250, each in a different pay period of 2019, to spread out the tax withholding from the employee.